A friend of mine recently published information about “complex grief” on her Facebook page.  In her situation, it was publicly clear that her husband’s death was not of natural causes which left her with dreadful circumstances.  Fortunately, she was surrounded well by loving friends and support. This kind of information is helpful in many ways but especially so because when a loved one does not experience the natural chain of events leading up to death, trauma can also be involved for those who are left, thus prolonging grief which some do not understand.  It can feel like there is pressure to just get over it or move on with your life when the complexities of how the death occurred far outweigh the grieving process itself. This matter may pause and disrupt the stages of grief to begin at a later time in an attempt to simply exist and survive. In my situation, it was not public knowledge for quite some time that anything took place other than ‘life to death’ which created yet another level of isolation. This whole nightmare of “stealth euthanasia” is not something that is easily understood, or certainly accepted much less acknowledged for the most part at this point.   Unless one reads carefully the information provided on this site, it still may seem vague so I urge to please take the time to read the links provided to know and understand WHAT IS GOING ON. It could happen to you or your loved one at any time. I have the deepest gratitude and respect for those who have continued to post encouraging notes, likes, pray and provide support over the past two years.   Even still, Jack’s presence is strong and I continue to be amazed by the magnitude in which he made a difference, both in-depth and numbers. He was not ready to go.  He did not believe it was his time.  Yet, we are in this world and God tells us that in this world we will have trouble.

“I have told you these things so that in me you may have peace .In this world you will have trouble.

On the morning of June 20th, 2014, I felt an inkling that I should ask the Lord which shirt to wear before I went to walk!  I don’t normally do that but since it is just He and I these days, I do find that the more I communicate with Him even in the smallest details it builds our intimacy and the more He shows me. Well, the answer was a red and white seersucker sleeveless shirt for some reason which I had not yet worn this summer. So, I left early to go for a walk and while walking began to feel my mind moving in directions of plans and requests!  This was new because up until that point it had been a struggle sometimes just to make it through another few minutes or hour much less a day and then through the night.

What could I possibly ever look forward to again?  It seemed to all be gone now that he was gone. They were our plans.  Our requests… After my walk I sat down outside in my red and white chair that he bought for us to keep in his car next to his black and white chair so that we could stop for picnics whenever the urge hit us.  I love that chair. Currently I am going through one of his NIV Bibles that he first studied when he met the Lord back in the ‘80’s along with my new devotional book.  Almost every page is filled with his notes and stars beside of verses which he underlined in his special colored pens, but rarely in red. While reading, the most adorable couple walked by with their two-year old daughter on their way to the pool.  Their lives looked perfect and seemingly began just when mine ended.  At that moment I looked down at Jack’s Bible and this is what I read… It just so happened to be Psalms 20 on June 20th, (not planned) 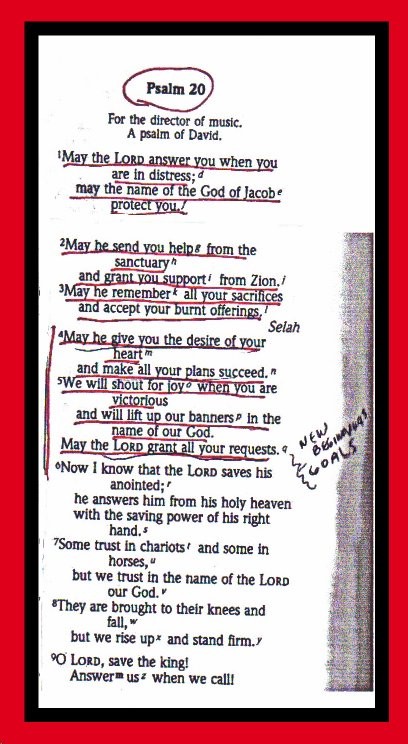 NEW BEGINNINGS
GOALS
(in his own handwriting!)
And the verses are underlined in red ink!  Obviously, I took note and also laughed out loud!  Yes, Lord, I am looking and listening!  Jack prayed daily for the Lord to give me “eyes to see and ears to hear.”

As if that was not enough...I left about an hour later to go to the visitation for my college girlfriend who had just become a widow.  So, I got out of my car, walked down the sidewalk and before rounding the corner looked up.  Looked again and could not believe my eyes.  No. This is a joke. OK, I get it now… 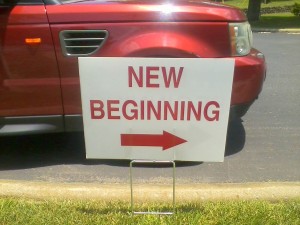 The first person I saw inside the sanctuary after greeting my friend was one of Jack’s close friends whom I met June 11th, 2011.  I had not seen him before or since that time but out of the hundreds of people in that church visitation, he walked right past me and we had a most comforting and uplifting conversation.

“Jack was one of the nicest and most Southern Gentlemen I ever knew.”

This was just what I needed to hear at that exact moment. The next day, June 21st, would be exactly two years that Jack’s Memorial Service took place at The Temple in Nashville,TN. 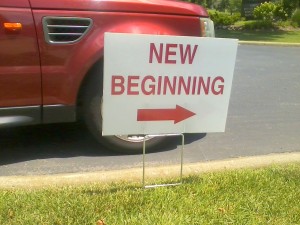