For the next few days, TSP will highlight artists, authors, caterers & volunteers who generously served our community three years ago during this significant & special event in Nashville. Each has a heart for Israel and the US! In the midst of world wide quarantine – “Shabbat” many artists and authors are unable to work & travel because of the ongoing regulations. If you feel led to pray for and or support any of them now, please see links provided for more information. Thank you!
Give. Pray. Hope. VOTE!

Chris Mitchell reports on the front lines of Israel’s history from Jerusalem. 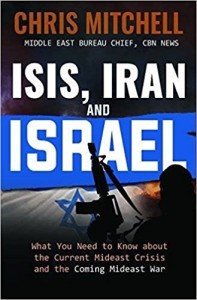 While the world’s attention turns more toward the Middle East, CBN viewers have grown to appreciate Chris Mitchell’s timely reports from this explosive region. Mitchell brings a biblical and prophetic perspective to these daily news events that shape our world. Mitchell began reporting on the Middle East in the mid-1990s and in August, 2000, moved to Jerusalem to establish the CBN News Bureau. Since then, he s reported from the front lines of the region, traveling to Mideast countries on a regular basis. He has also reported on the tragic rise of Christian persecution throughout the region. Mitchell s stories are seen on CBN s The 700 Club on nationwide cable, as well as the other CBN News programs. Mitchell wrote Dateline Jerusalem: An Eyewitness Account of Prophecies Unfolding in the Middle East in 2013, tracking the many historic and prophetic trends that show Jerusalem sits at the crossroads of history and prophecy and that history s final chapter will be written in Jerusalem. In December 2014, Mitchell authored Destination Jerusalem: ISIS, Convert or Die, Christian Persecution and Preparing for the Days Ahead. Destination Jerusalem records the profound changes in the region wrought by the rise of ISIS, Iran s nuclear program and the dangers of Hamas A native of the Boston area, Mitchell earned a B.A. in History at the University of New Hampshire in 1975. In 1987, he graduated with honors from Regent University, earning an M.A. in Communication, and has been entered into Regent University s Hall of Fame. After more than a quarter of a century with CBN, Mitchell s goal can be found in I Chronicles 12:32: to provide viewers with an understanding of the times for such a time as this.

For Gifts and /or Contributions: send to this link: click HERE

Event: Authors and Artists who have a heart for Israel gathered together on the Centennial Year of the Balfour Declaration to Celebrate Love, Light & LIFE!  Founder of The Simplicity Project, Lucy Karen Clay, opened the evening in prayer. Within 3 1/2 weeks of the vision, every table was filled with standing room only. Volunteers … Continue readingAuthors & Artists Stepped into the River & Cherished LIFE!